Wing over the Qingdao

The Sacum rebellion and its last uprising near Kagoshima in the Battle of Shiroja on September 24, 1877. The last units of the Samurai of the Sacuma family and the units of the new imperial army, dressed in European style uniforms and armed with modern Western guns, stood opposite each other.

When US Commodore Matthew C. Perry headed the squadron of the four Pacific Ocean Fleet squadrons, docking one beautiful July day in 1853 in the Gulf waters in front of the capital of Japan's Edo Empire, and opposed to the will of his rulers to open the hermit empire to the world, few people knew that the backward feudal country called Nippon will grow in a few decades a powerful regional power that once and for all will sweep away the years of traditional Asian power status quo defined by the geopolitical interests of European colonial powers and the United States. What's more, in a translated sense, it will shake the global hegemony of the "white race". 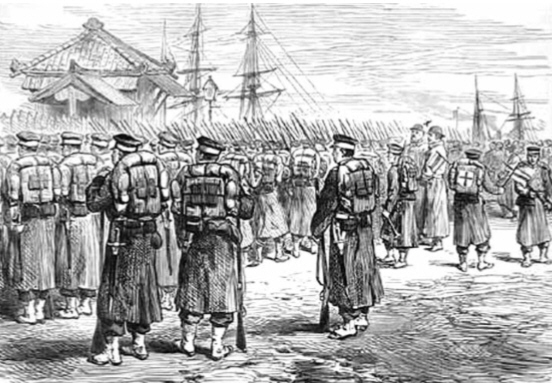 The miraculously rapid expansion of the isolated island state triggered a forced confrontation of the East with the West, which at that time and with full force revealed contradictions that hitherto concealed the entire Japanese society, relying on medieval production relations and the caste system. Practically from day to day, it accelerated social changes, at the end of which a modern civilization, enjoying not only an unusual respect, but also an unceasing admiration, grew stronger, after the handsome, intelligent and educated young man with a visionary spirit, emperor Mucuhito.

Unlike many court dignitaries, often sighing in the "good old days," he intuitively sensed that the time had come for the country to undergo a painful, but absolutely necessary, modernization if not to end up as a livelihood colony in the hands of some of the European powers. The survival of the Empire now depended on a functioning, modernly conceived, dynamic Western-type administration, advanced industrial base, and armed power built and armed along the lines of world superpowers. Already in his inaugural speech, he outlined the whole set of socio-economic changes, named after the period of his government "reforms of Meiji". Above all, he wanted to change the traditional feudal arrangement of a society in which, until now, he had always enjoyed the privileged position of the continually welcoming princes, leaning on their own samurai armies. Powerful nations naturally outraged it so much that "in the sovereign's own interest" arose several rebellions that were soon suppressed by the forces against which they were directed. The only thing she had accomplished was that she had consolidated the emperor's position so much that the transformation of the backward empire into the advanced capitalist and industrialized state could not prevent it. After all, the country had no other way. Tenno1) has long and very carefully watched the imperial defeats of the European powers and the parcel of the world into spheres of influence. He knew very well that the only chance for survival in this turbulent period was that the "divine Nippon" would be as economically, industrially and militarily massive and ferocious as the imperialist powers of the old continent. Japan had to, whether it liked it or not, give up voluntary isolation, fully open the world, and seek inspiration in the best that Western civilization offered. During the second half of the 19th century, Japan was changing literally. His Imperial Majesty continued to enjoy the highest and undisputed authority, yet he had suddenly had to follow a brand new constitution. The Archaic Institute of Counselors withdrew from the prosecution, but much more powerful apparatus of the government cabinet, and the reins of the legislature took from the hands of some elected ...

You can read more in the new issue of Plastic Planet 3/2018.