We use cookies
This website uses cookies and other tracking tools to improve the user experience, display customized content and ads, analyze website traffic and determine the source of traffic.
Edit my preferences I agree to the use of all cookies
You can deny consent here
Home / News / The Henschel Hs 129 - Review of a new book Airframe & Miniature No.17
Manufacturers
Information
Shop Plastic Planet

Review of a publication Airframe & Miniature No.17: The Henschel Hs 129- A Detailed Guide to the Luftwaffe's Panzerjäger by Richard A. Franks from the Valiant Wings Publishing.

Review of a new publication Airframe & Miniature No.17: The Henschel Hs 129- A Detailed Guide to the Luftwaffe's Panzerjäger by Richard A. Franks 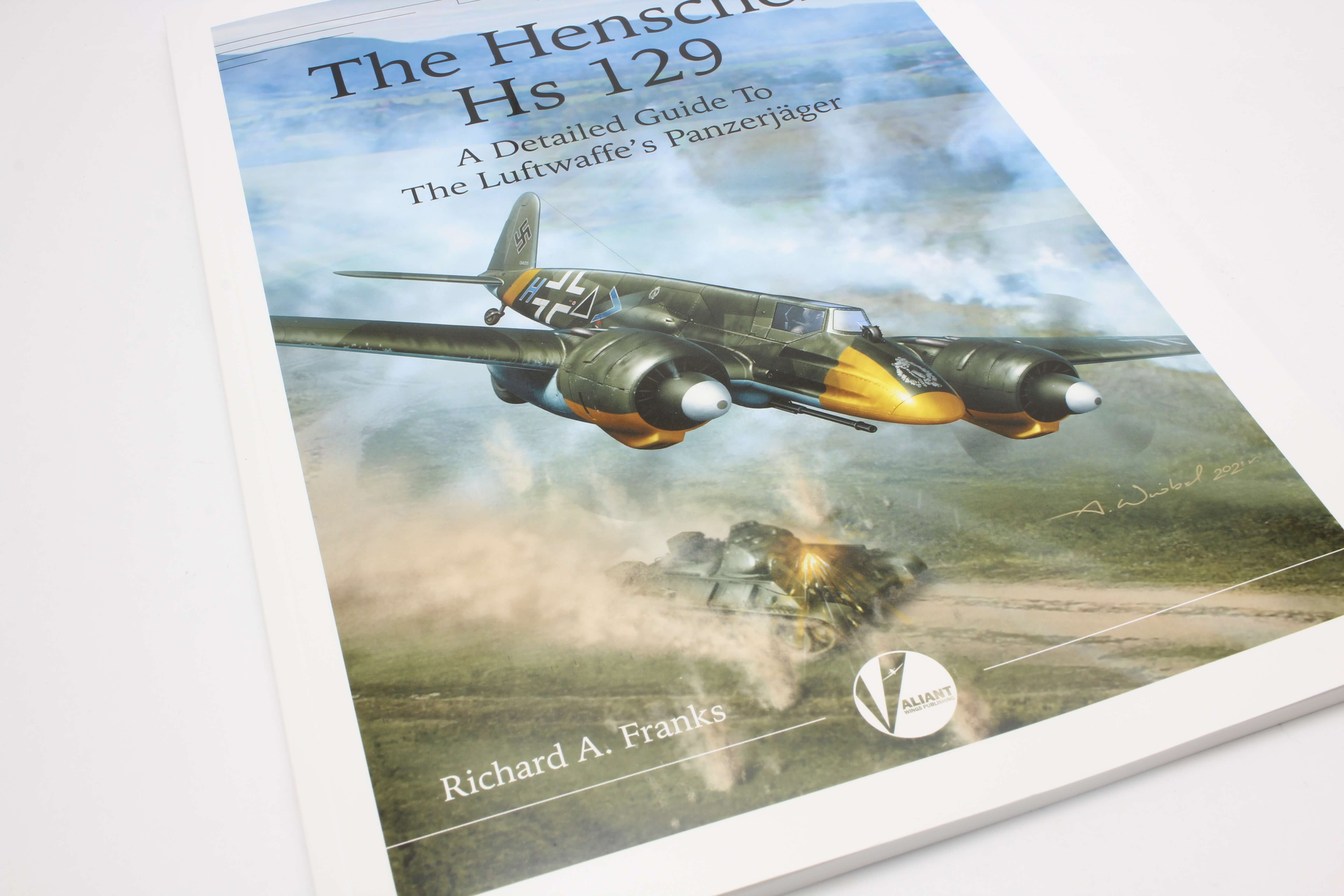 Author of the review : Milan Nes

The British publishing house Valiant brings us a completely new publication about the "German World War II predecessor of today's A-10 Warthog", Henschel Hs 129, from its beginnings - the first prototypes, through notorious versions, to such rarities as there were versions for towing gliders or with six downward-facing 75mm mortars fired by an antenna monitoring the electromagnetic field of large metal objects under the aircraft, until the reasons for the termination of its production. Despite the relatively small number of aircraft produced, this type has entered the history of aviation. He had a really unconventional concept of a battle machine for his time, where everything was subjected to the idea of achieving the best view from the machine and maximum protection of the pilot by placing a heavily armored cabin into the bow and the minimum front profile of the aircraft - thus the target. This was brought to such an extreme that some devices were outside the cabin, including the sight. Looking at the version with a suspended 75 mm cannon, one really can't help but recall the current American A-10 or Su-25.

Valiant's publications are always full of really interesting period photographs, and with this one, it is the same. The publications has 130 pages and it's written in english, printed in color on coated paper. It clearly discuss in logically arranged chapters. 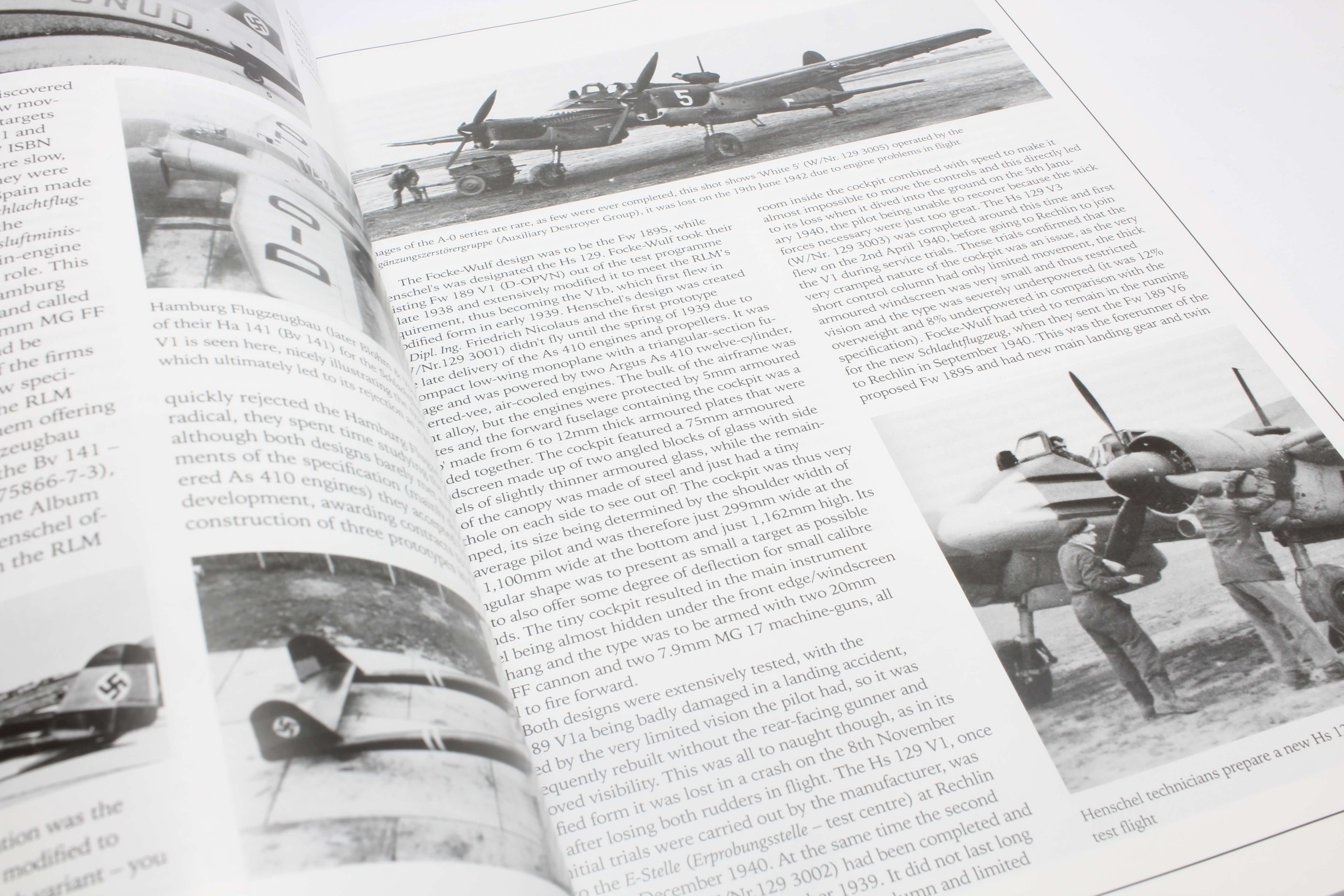 The publication combines both history and walkarounds, original drawings and really rare photographs with a focus for true enthusiasts and modelers. The zero chapter focuses on the history of the type, from previous models and the first prototypes to the testing of loot machines by the Soviets. 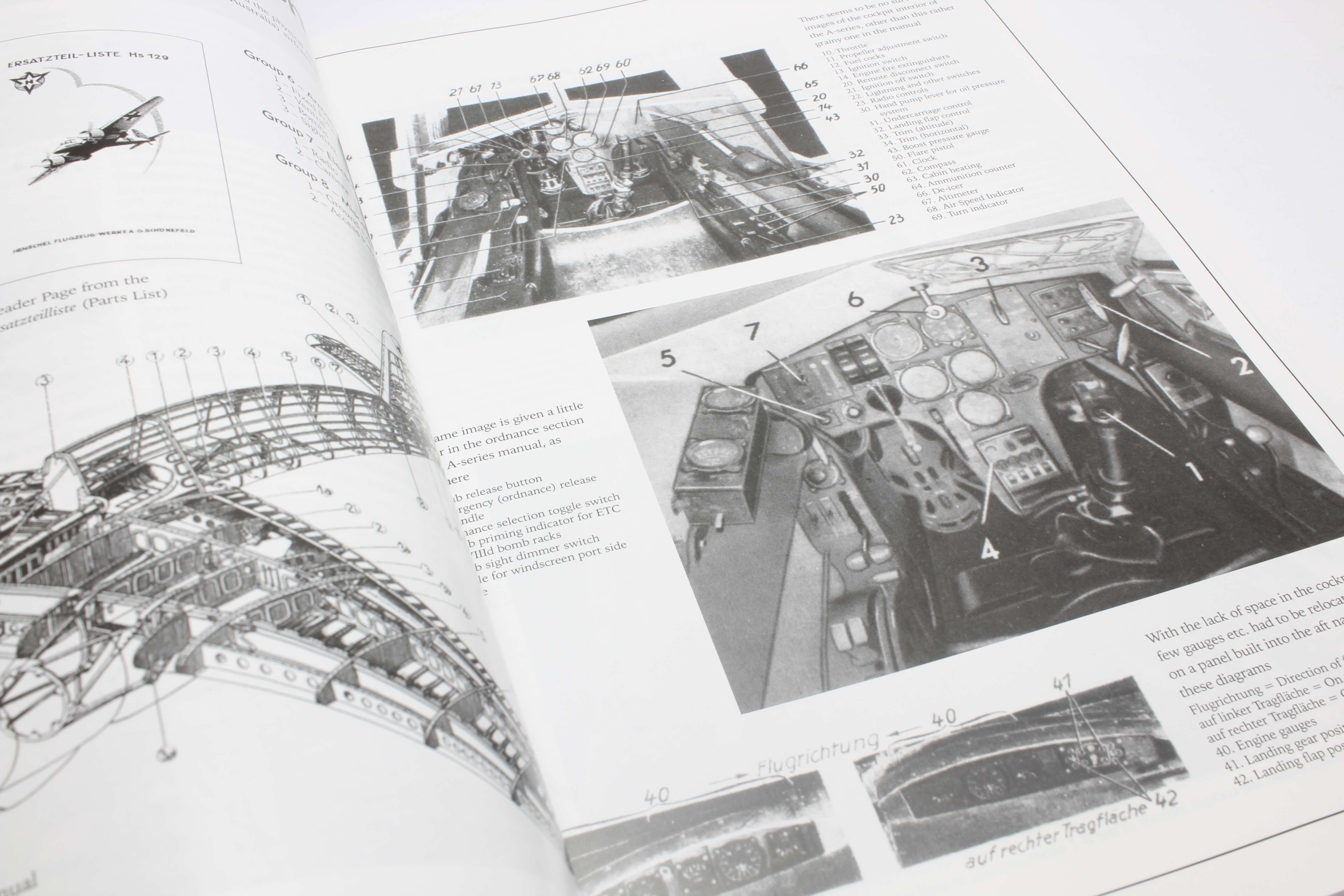 An entire chapter is then devoted to the details of the machines, both in photographs and drawings. Everything is clearly divided into subchapters (fuselage - tail - wings - engines - armament - electrical equipment and others)... 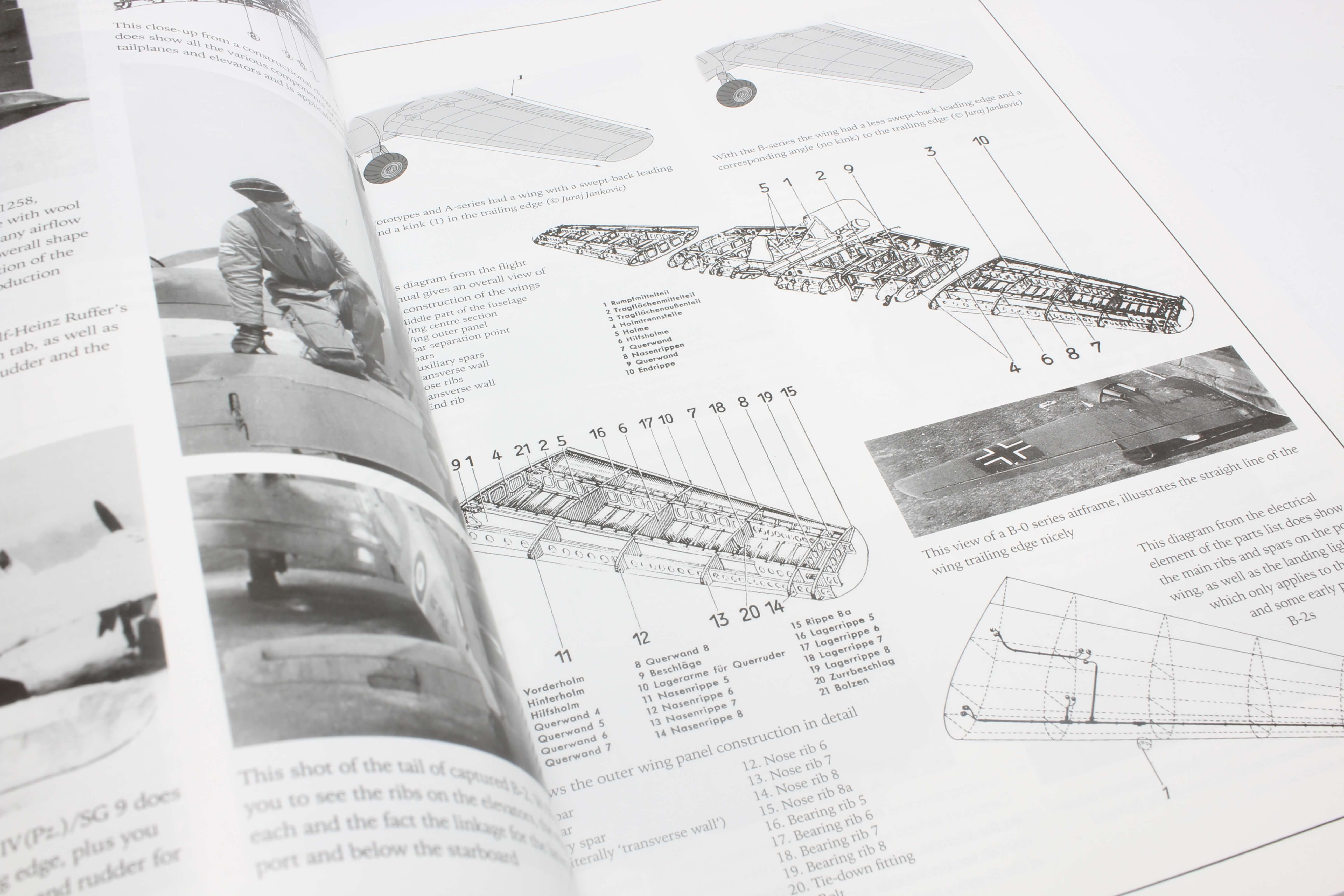 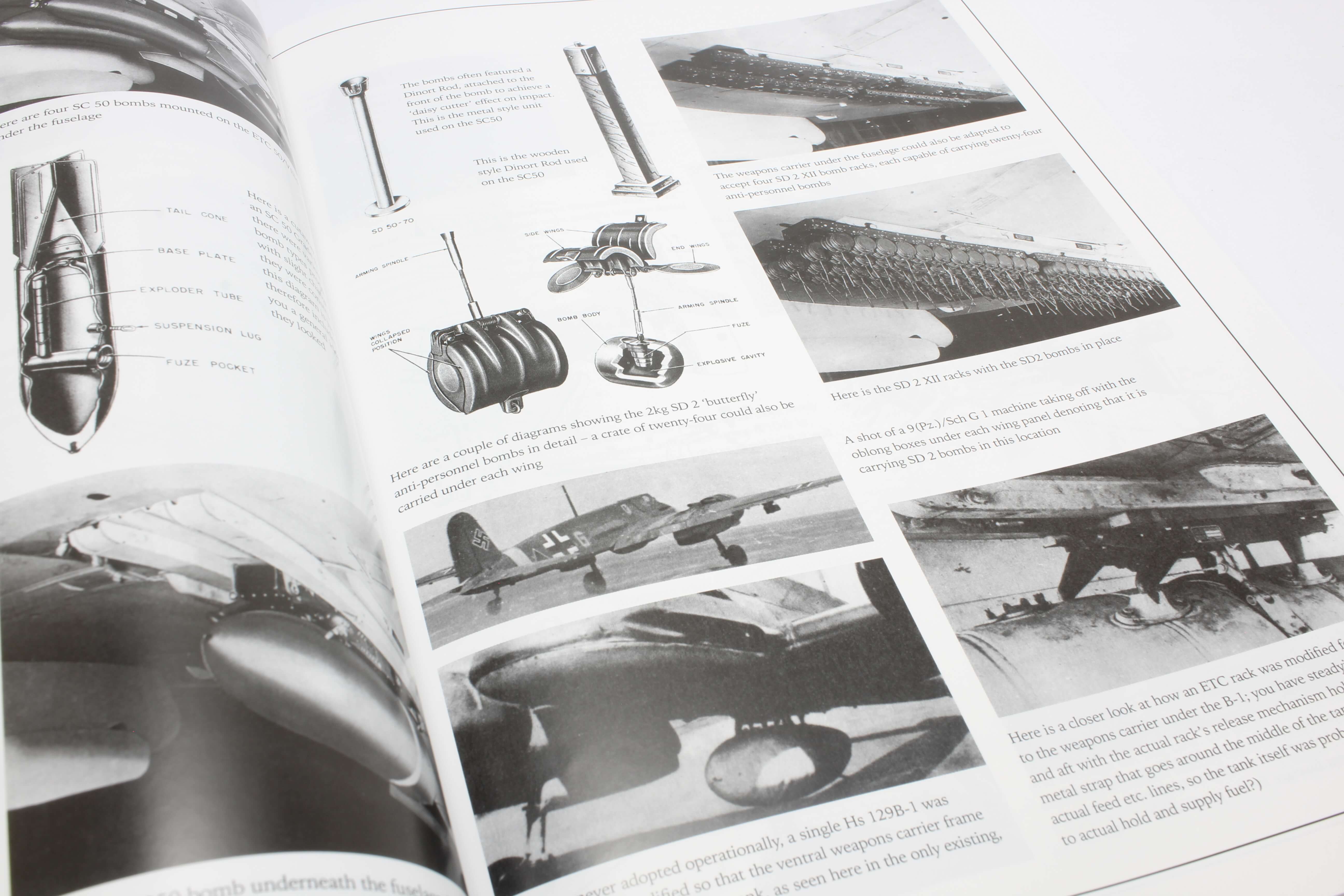 Here, in the chapter on armaments, there are, for example, period photographs of the predecessor of the "cluster" bombs used on the Hs 129. 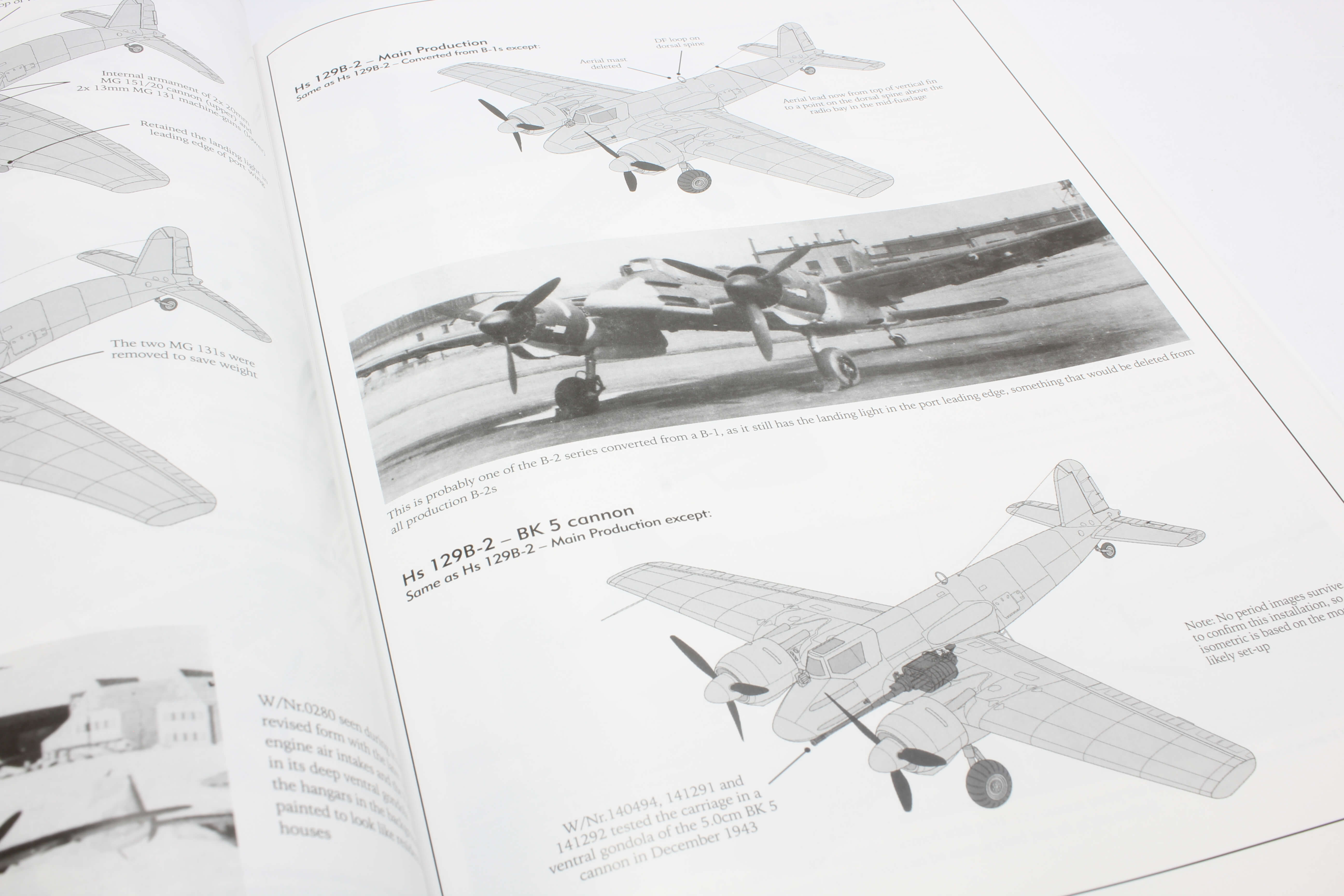 Personally, at Valiant, I really appreciate clear analyzes of the differences between the individual versions, directly on the 3D views. 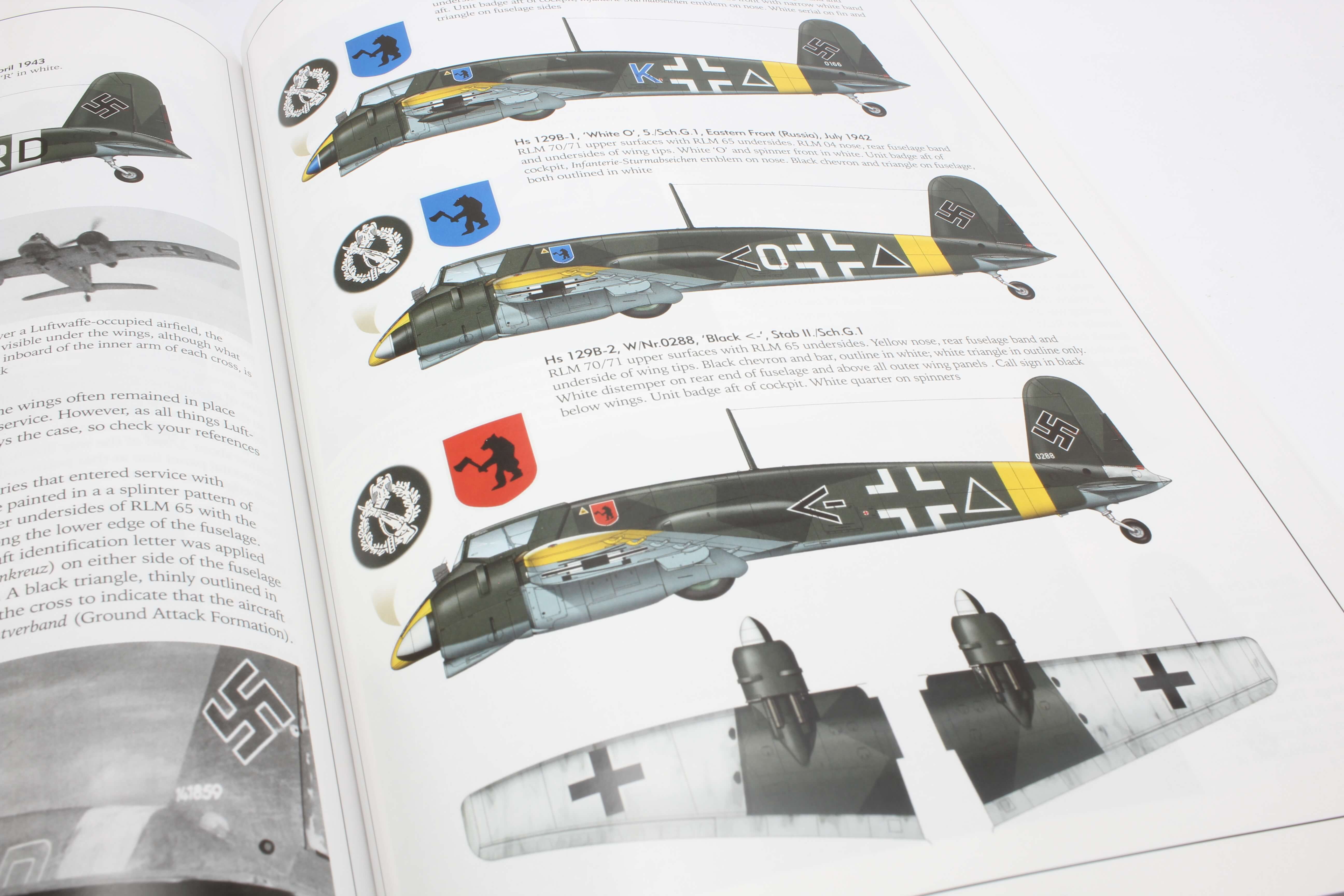 On more than 20 pages, both the notorious and really ratitative camouflage are shown. Mostly in combination with period photography - drawing. 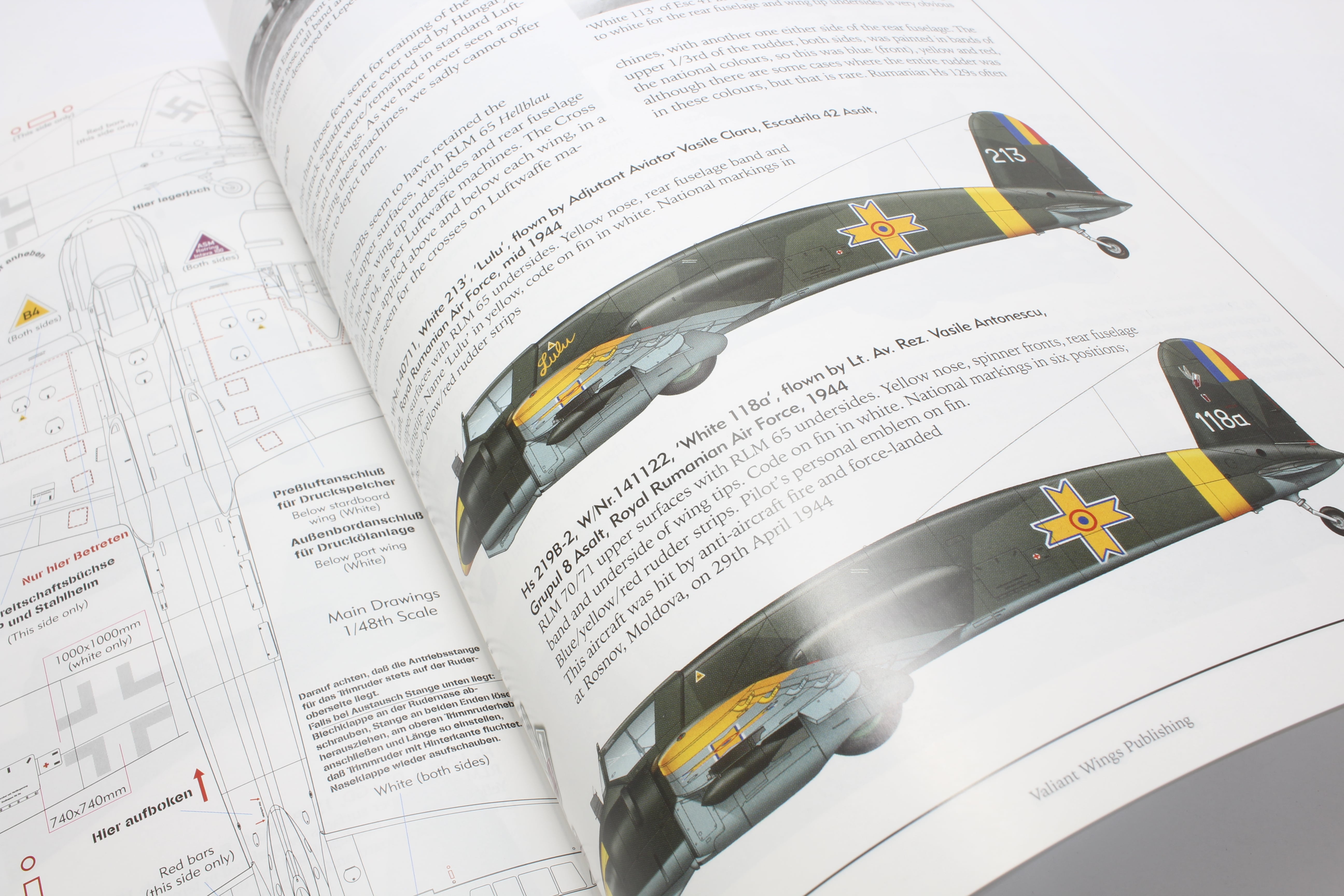 Not only modellers will be pleased with the drawing with a detailed description of the location of the labels and the size of the insignias. 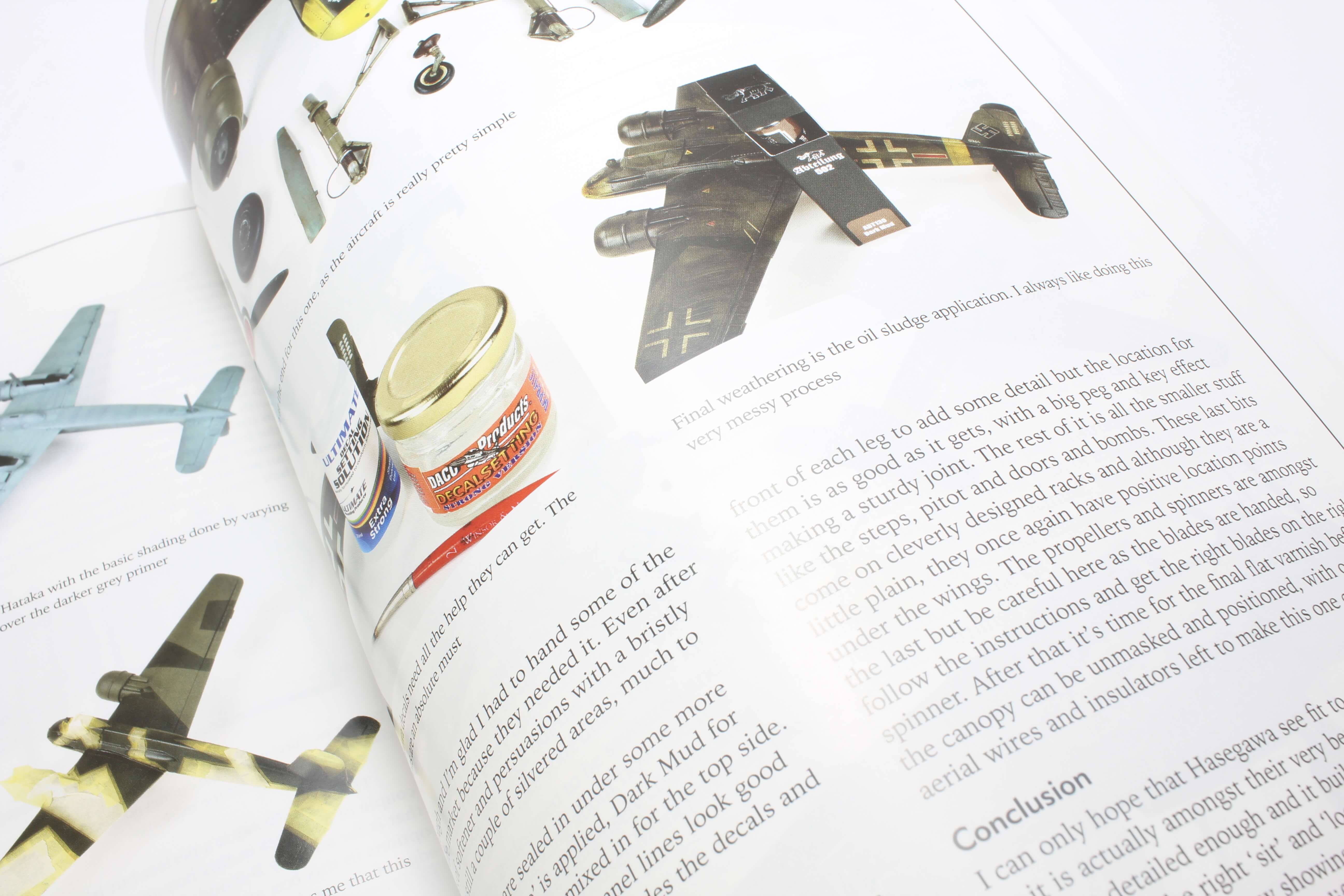 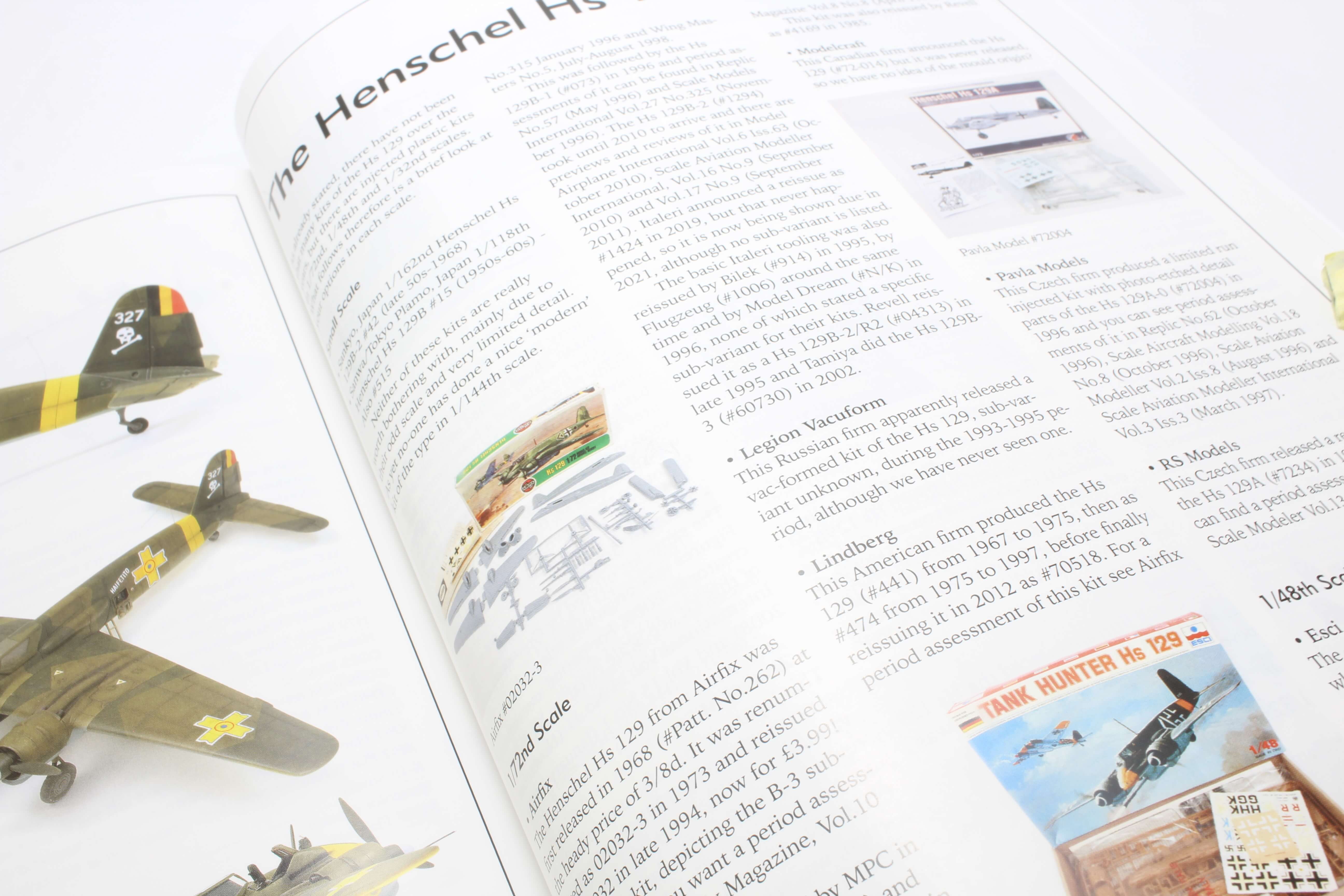 Of course, Valiant has a chapter describing existing plastic kits and a separate chapter is also devoted to available accessories, decals, masks and publications. 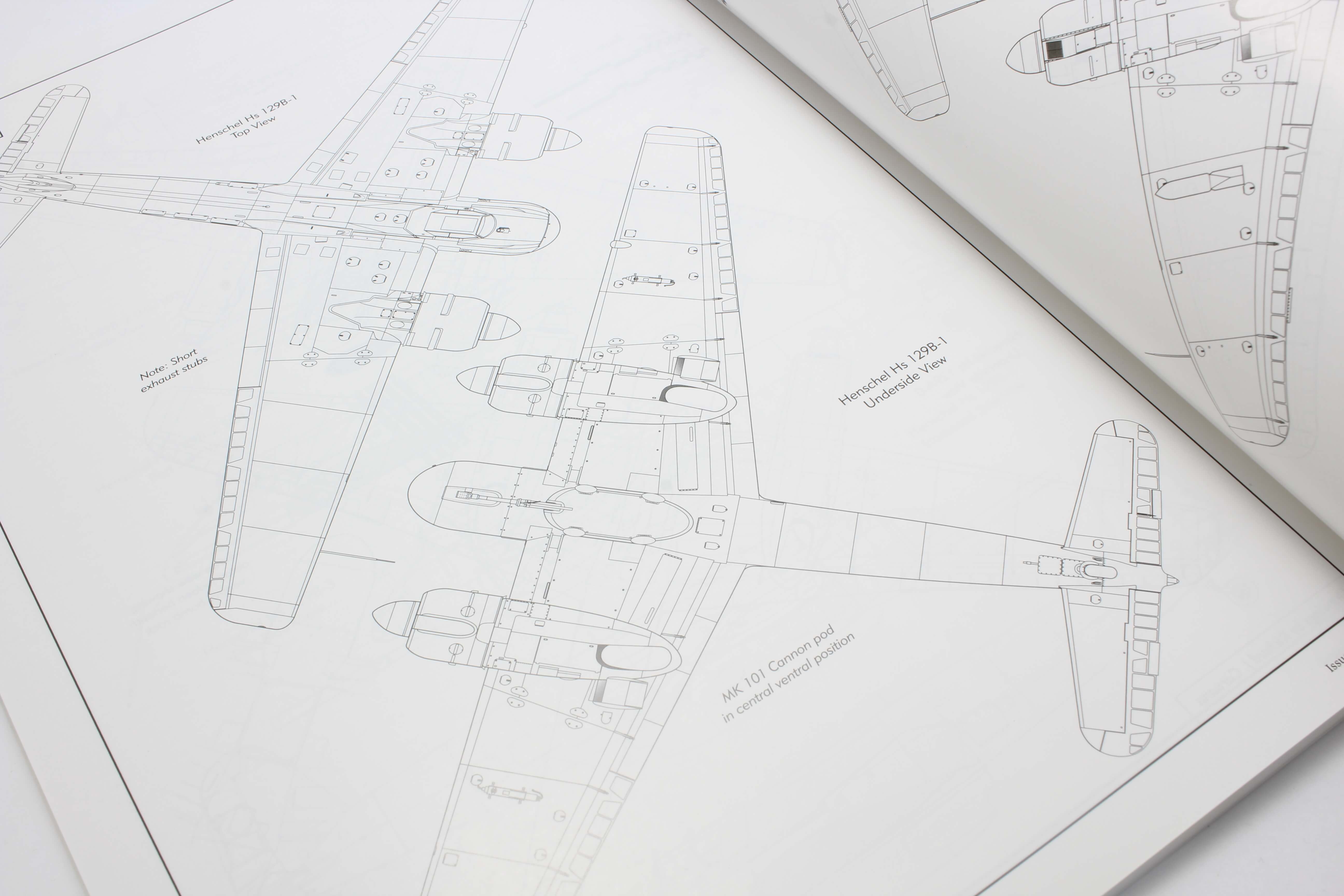 And never any quality monograph can miss drawings. Here in scale 1/72.