Photo review of the new plastic model He 162 Spatz from the company Special Hobby in scale 1:72 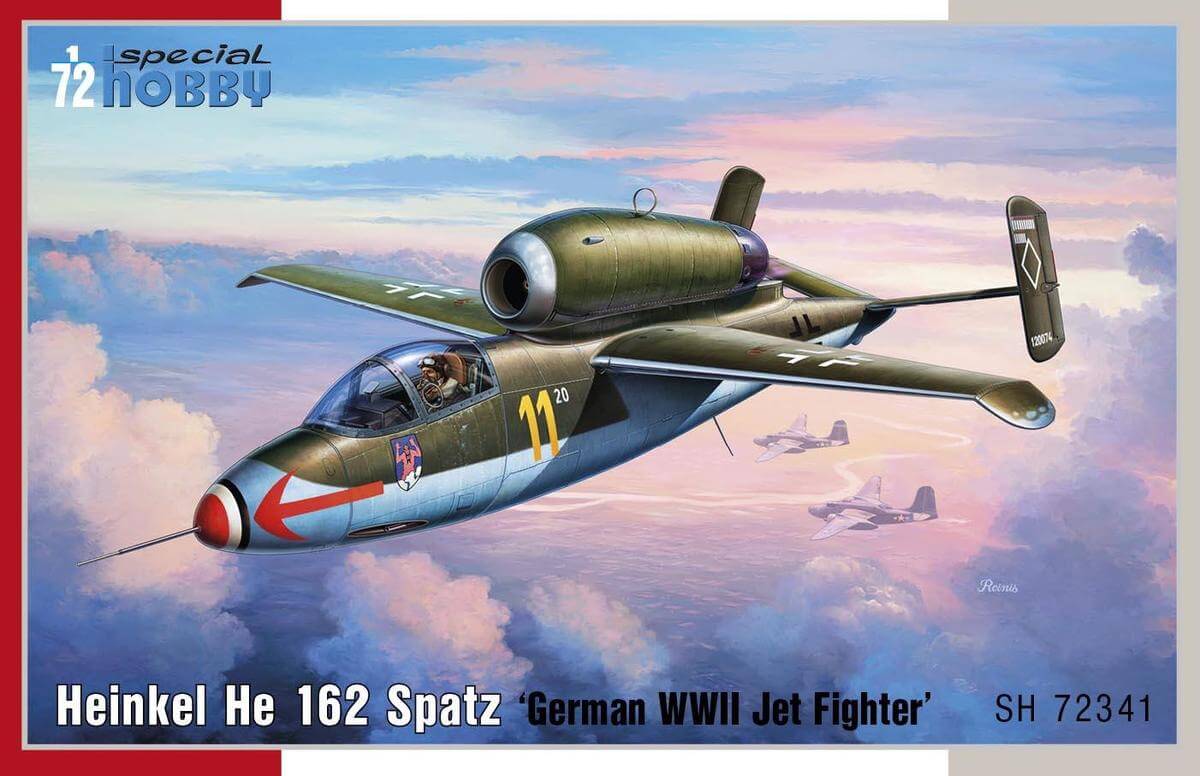 By 1944, it was already clear to many people that the end of the "Third Reich" was inevitable, and the last hope was to be "miraculous secret weapons", which should include this jet fighter. Due to the lack of strategic materials for aircraft production (metal alloys), aviation gasoline and the lack of trained pilots, it was decided to develop and produce a simple jet fighter.Given the critical situation of the Third Reich in 1944 deficiencies will not matter. It was planned to use wood instead of dural and unqualified workforce, the jet engine would not burn scarce gasoline, but kerosene and airplane should be easy to handle by young pilots with only basic training.

The first prototype He 162 left the factory in early December 1944 and first flew on December 6, 1944 from Schwechat Airport near Vienna with test pilot Peter Gotthold and reached a speed of 840 km / h at an altitude of 6,000 meters. 10th December Gotthold with the prototype flew, again from Schwechat, for a demonstration flight for representatives of the Nazi Party. He has been showing a quick flight at low altitude when one of the wings partially detached and broke off the aileron due to wrong production technology (the recommended adhesive was not used). The prototype hit the ground and Gotthold died in the crash. Operational deployment He 162 lived at the 1st and 2 Gruppe Jagdgeschwader 1. Rearmament of the unit  to the new type began in February 1945. The unit was declared fully combat-ready by 20 April 1945. From April 20 to May 7, the unit fought against Allied bombers and achieved two aerial victories. On 2 May 1945 Unteroffizier Rechberg shot down Republic P-47 Thunderbolt and 4 May 1945 Leutnant Schmitt on the aircraft "white 1" near Rostock Hawker Typhoon.

Despite everything, the He 162 was something special - it was designed and flown in 3 months, and after five months, several hundreds were built under extremely difficult conditions. It is fortunate for the Allies that the He 162 came too late to make it more than a record of the history of air combat over Europe, but the question remains unanswered what this fighter could do under more favorable circumstances.

He 162 was to this day manufacturers in 1/72 scale basically neglected. It was available as an old kit from company Dragon, quite poor Hobbyboss and even more aged Revell (ex Frog). I built the last kit almost 20 years ago - but it really does not reach today's standards (I intentionally omit rarities like Lindberg and resins, which are even more difficult to build). So it is very pleasing that we finally have a kit of the level of current high standards. 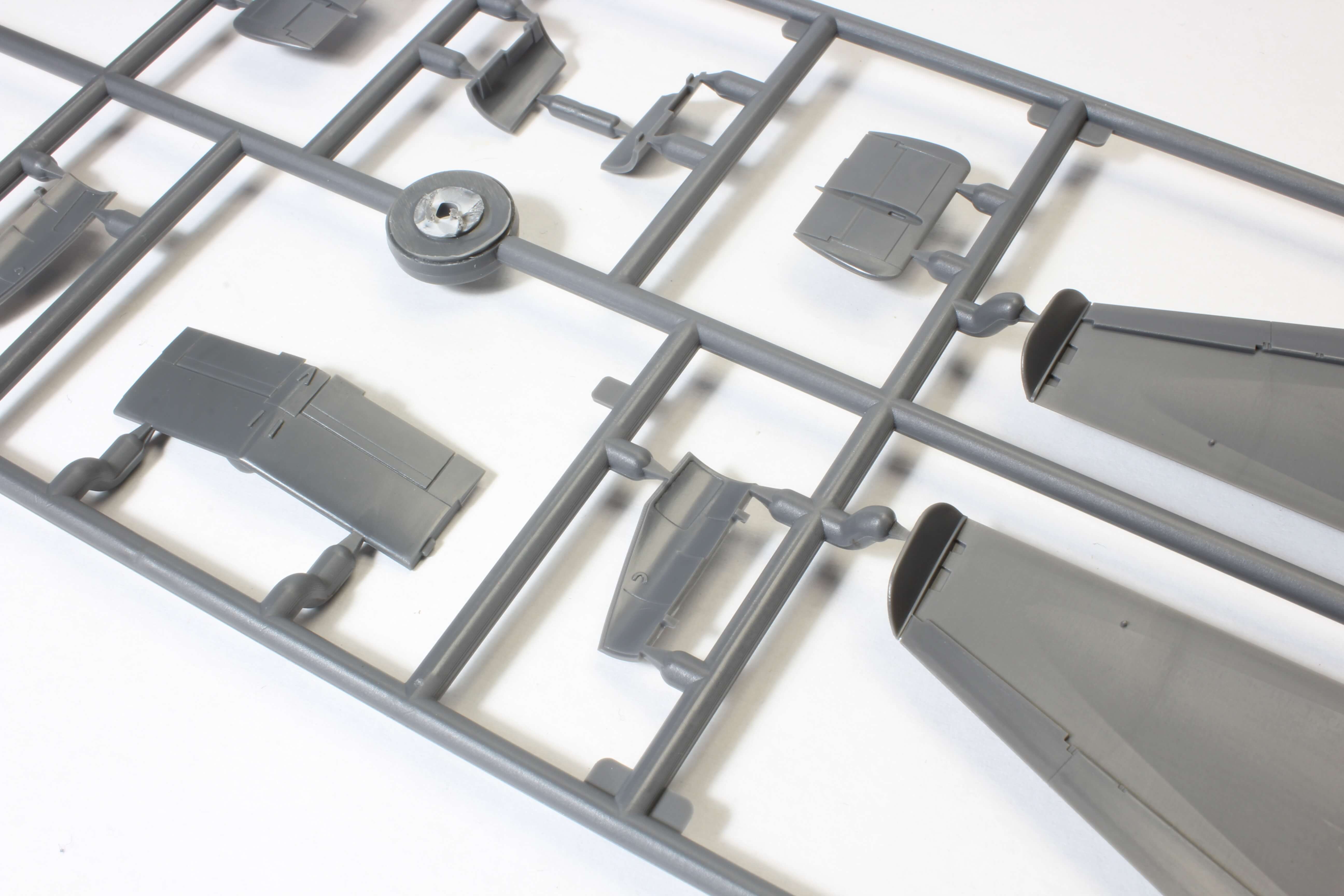 All plastic parts are excellent, completely free of cracks or burrs. Thin mold cutting line where it is easy to remove. Pure fine engraving. In the kit I did not find a single ejector, which would be necessary to clean. Compare to the test shots presented in Nurmberk Fair the producer made further progress. 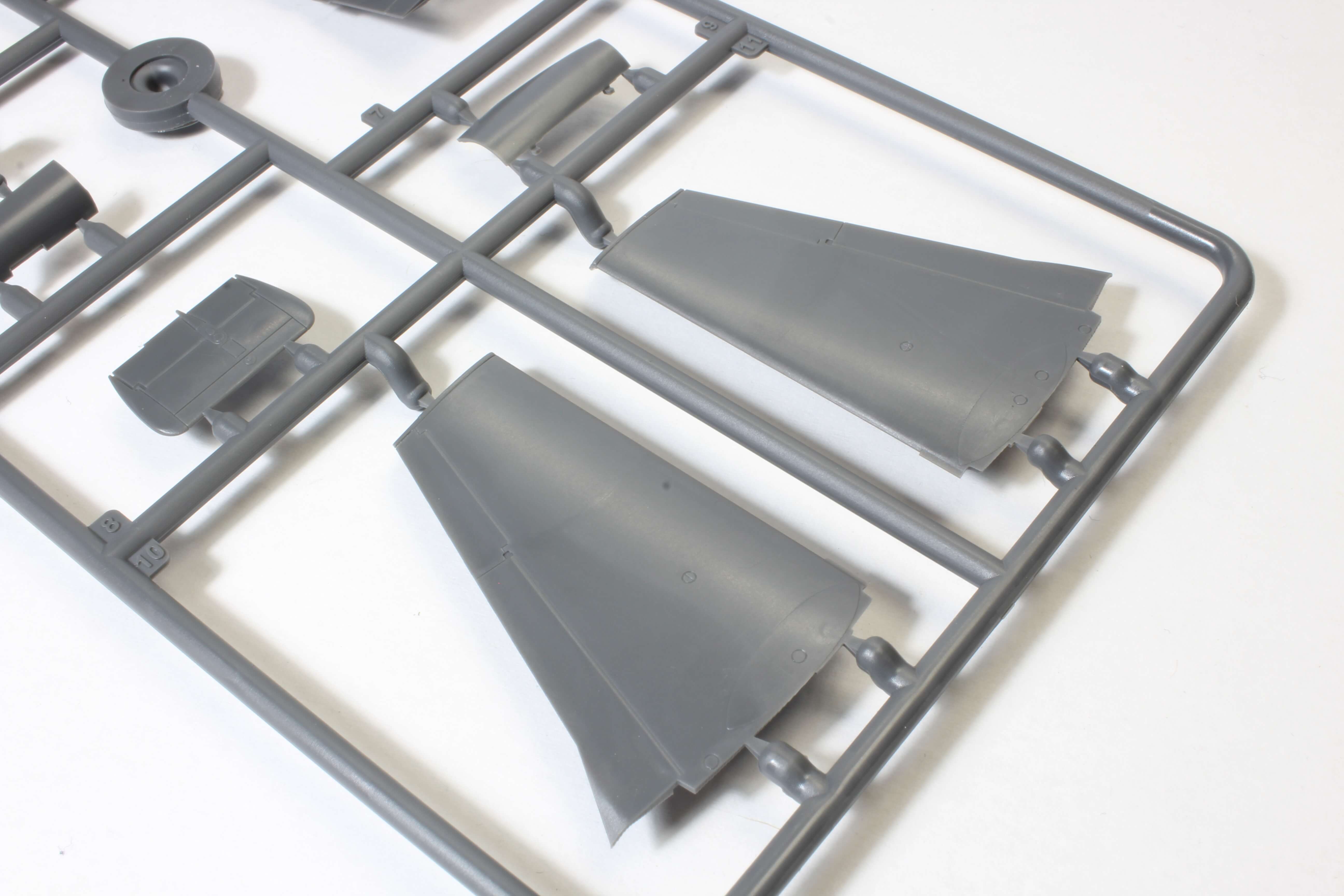 The absence of rivets on the wing does not matter this time - the original was mostly made of wood, so nothing is missing. 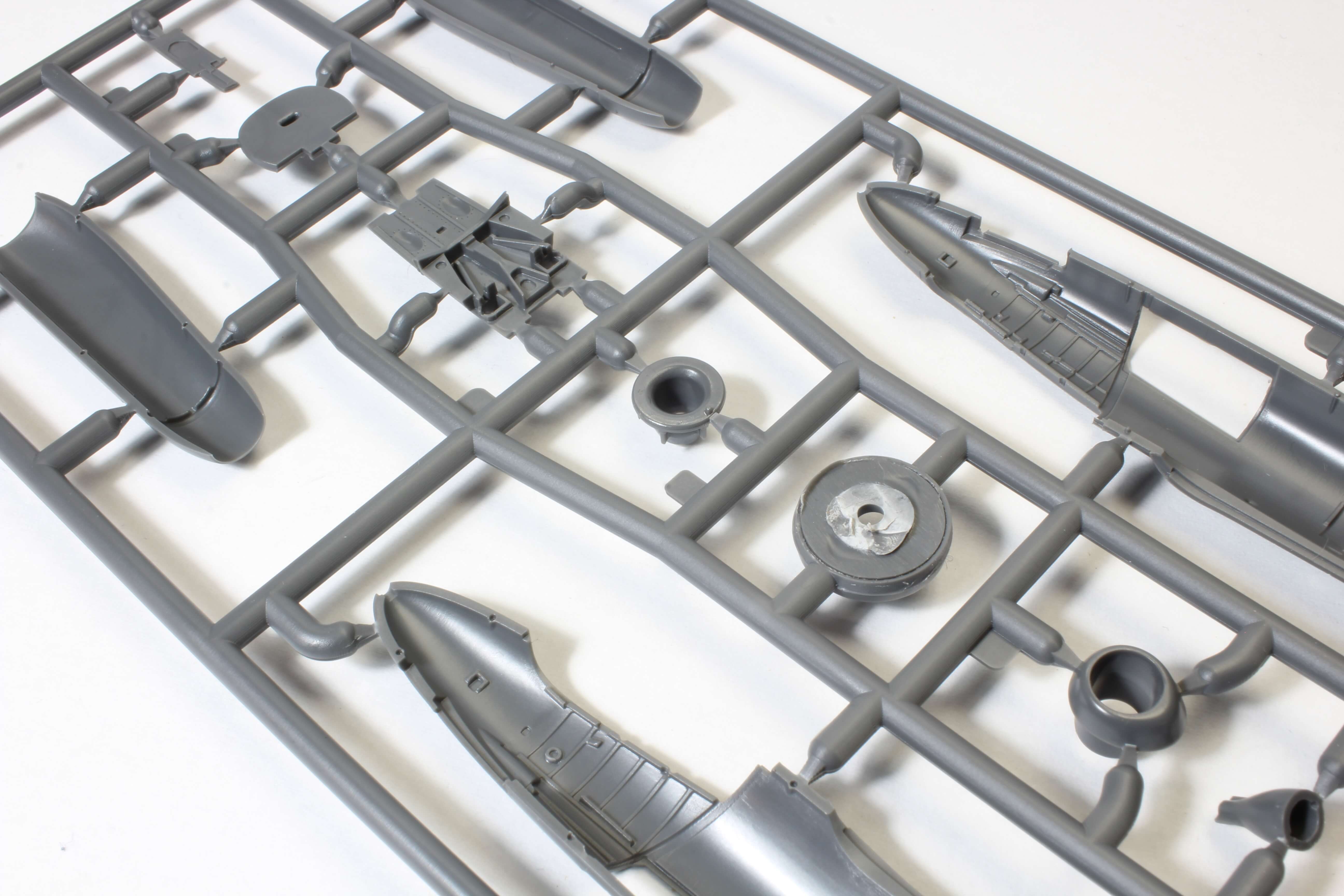 The interior design is of a high standard, a nice model can be built directly from the box and we can look forward to other accessories according to the manufacturer. 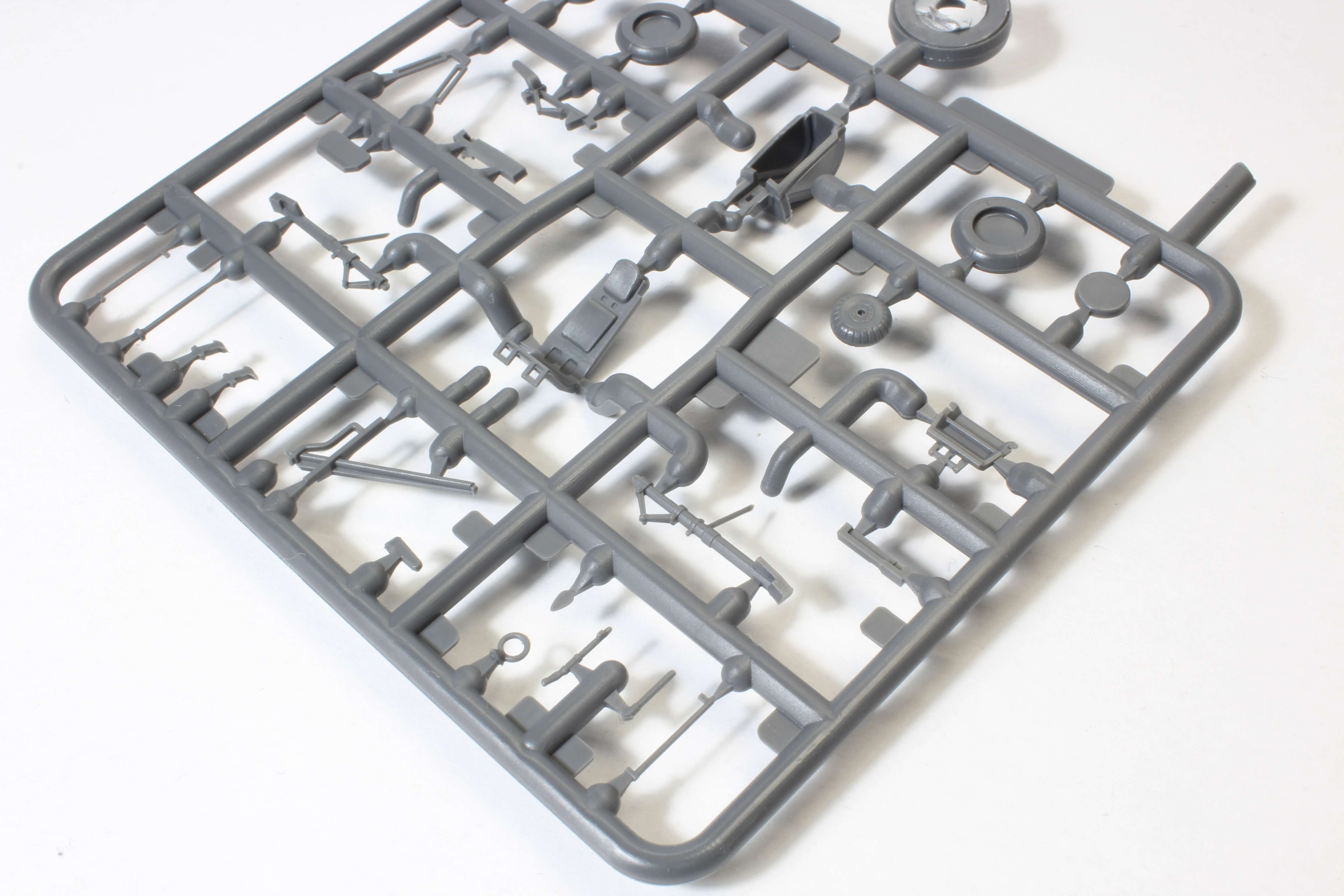 The ejection seat was really Spartan, although it was used and recorded as the one of the first successful ejection in the history of aviation, it must have been an unmistakable experience - the drive was not a rocket but basically a similar shotgun. 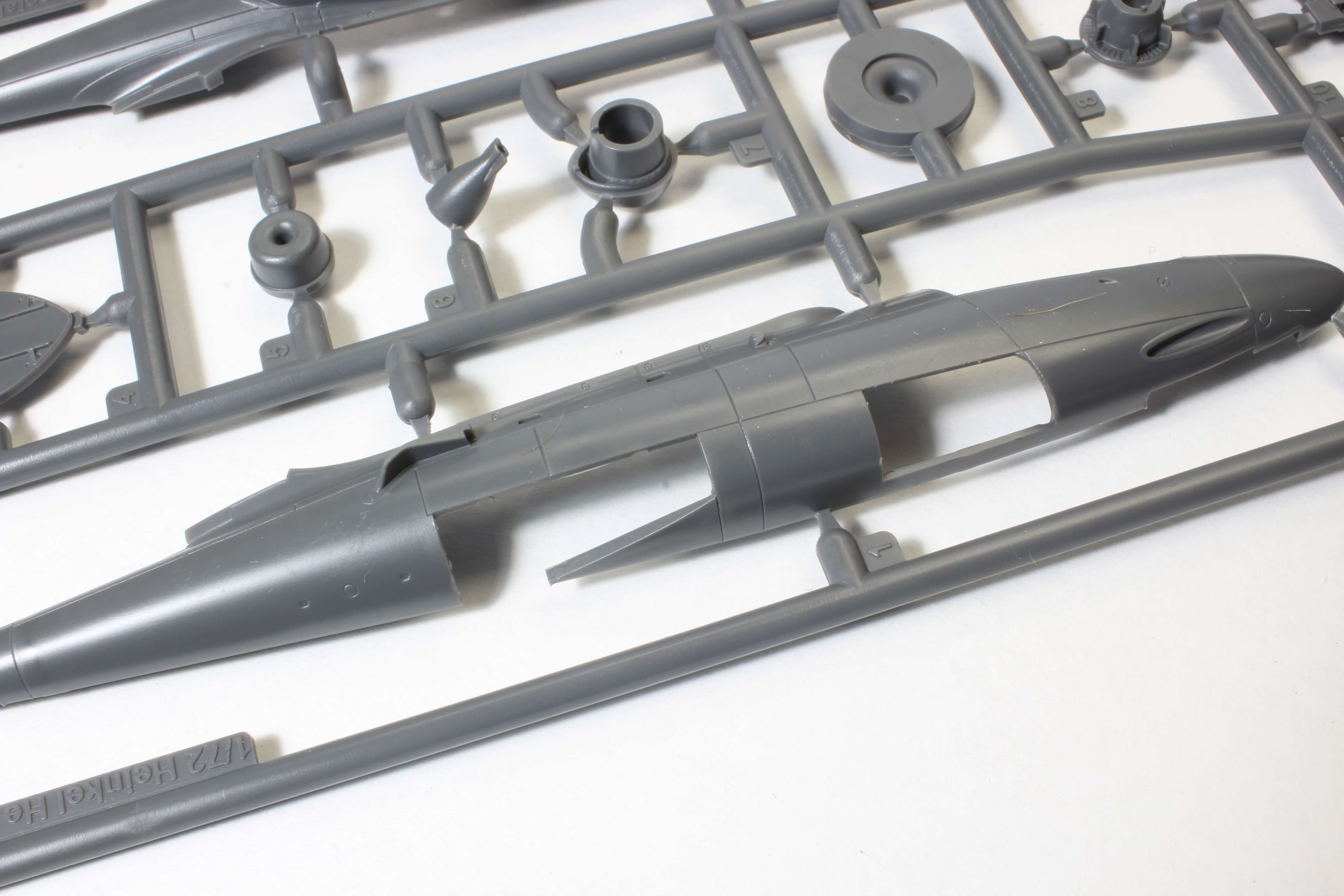 The only thing I would criticize a little is the design of cannons, but it can easily be added from injection needles or certainly soon will be a number of accessories. 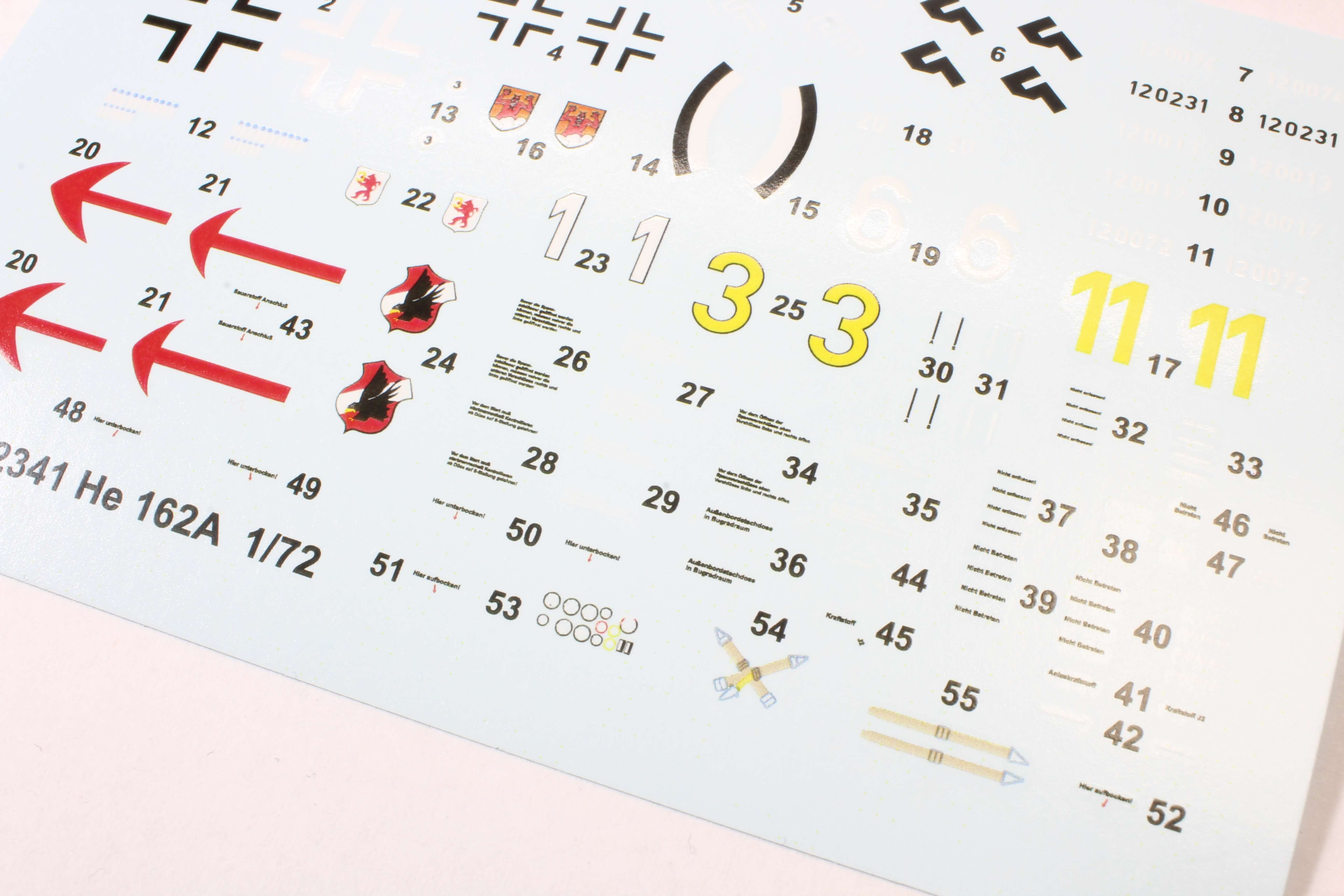 Decals have excellent registration and even small labels are easy to read. It is a pity that the swastikas are divided, but this is currently required as the standard, therefore it is not the fault of the manufacturer. 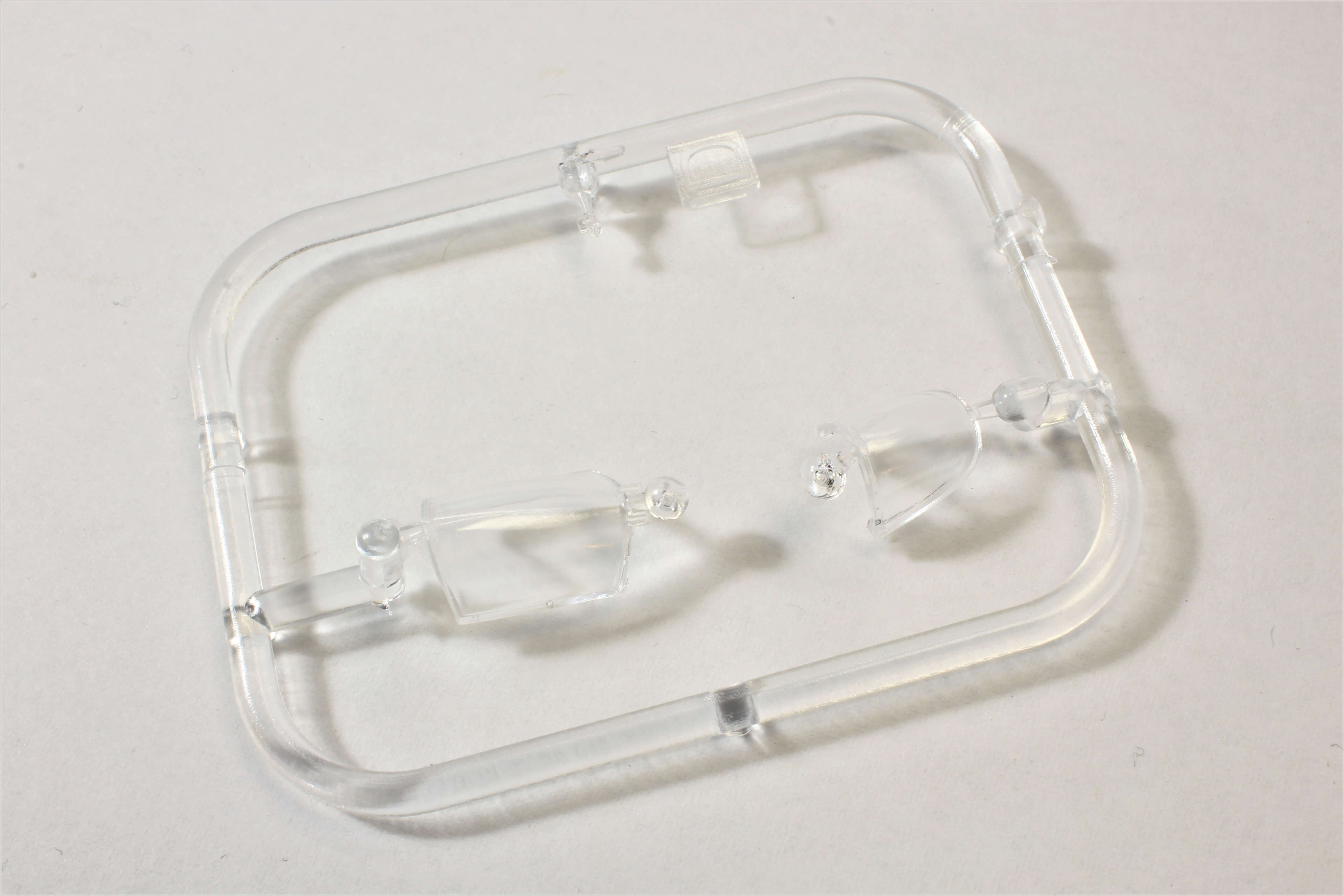 Clear parts are molded without bubbles and with sharp framing, but for a perfect impression they will need to be slightly polished. 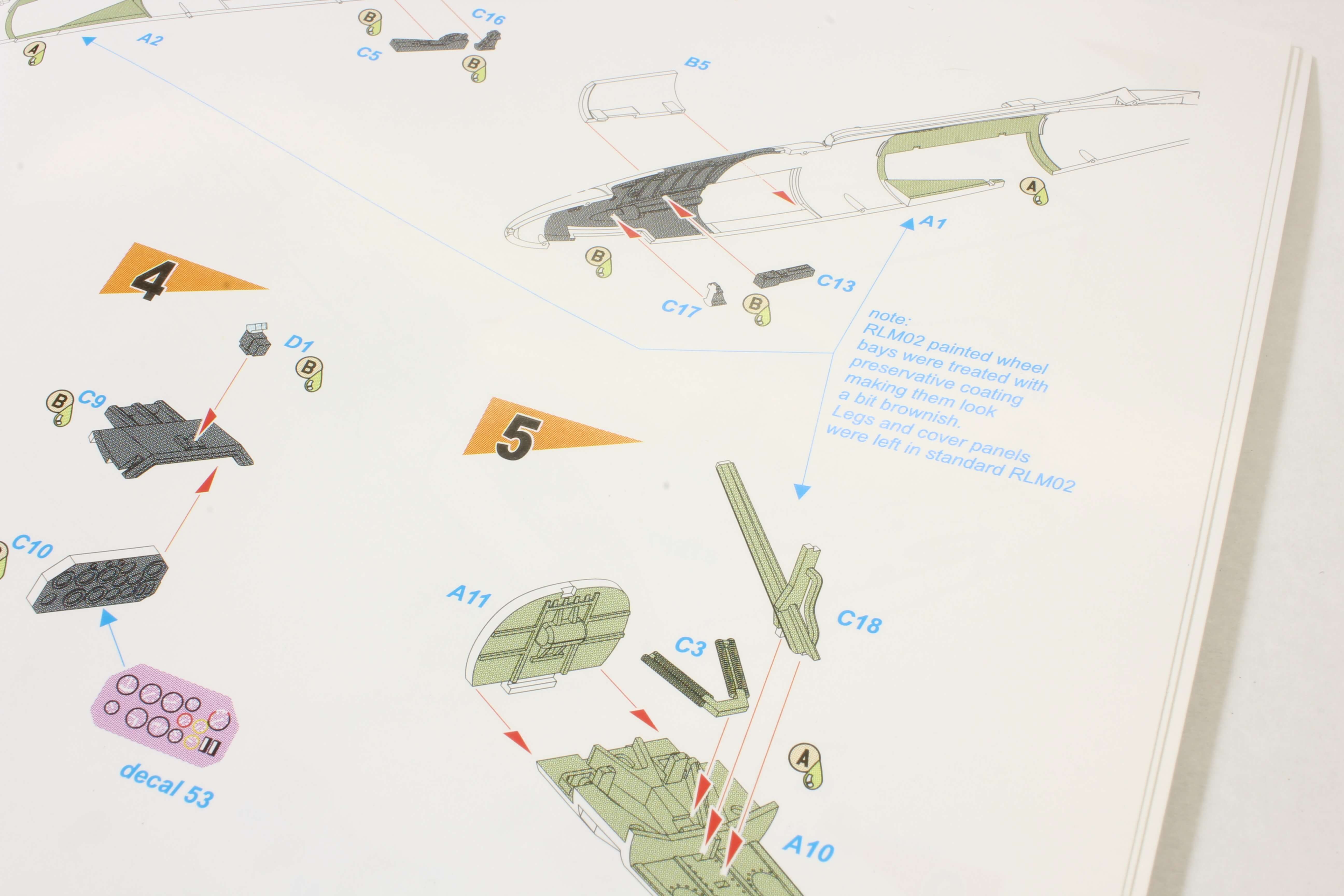 The instruction has been clear and I very positively evaluate its color design. It makes construction easier for modelers to know where to use which particular color. Colors are only shown for Gunze C and H. 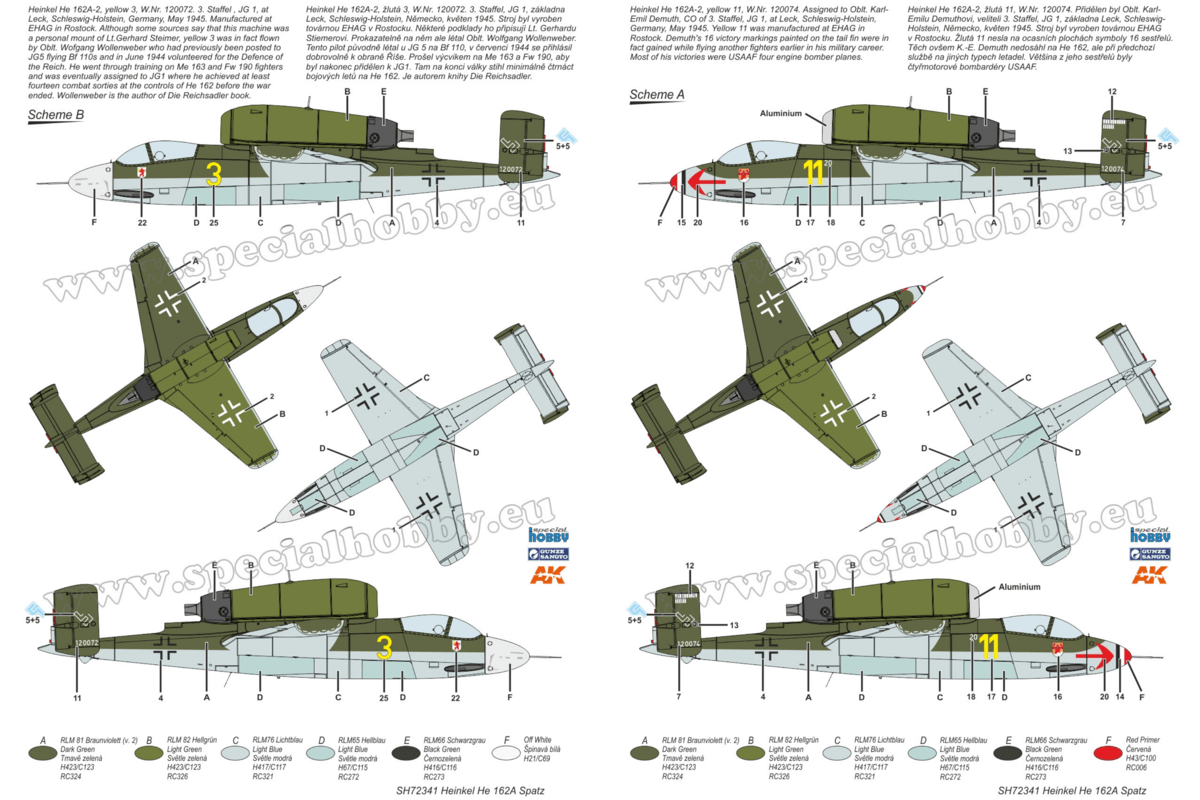 The choice of camouflage options is rich. There is probably the most famous 162 ka "yellow 11" with 16 kills depicted, but Oblt. K-E Demuth acquired on other machines. Then follows the "yellow 3" on which the famous pilot, the author of the book "Die Reichsadler" W. Wollenweber flew. 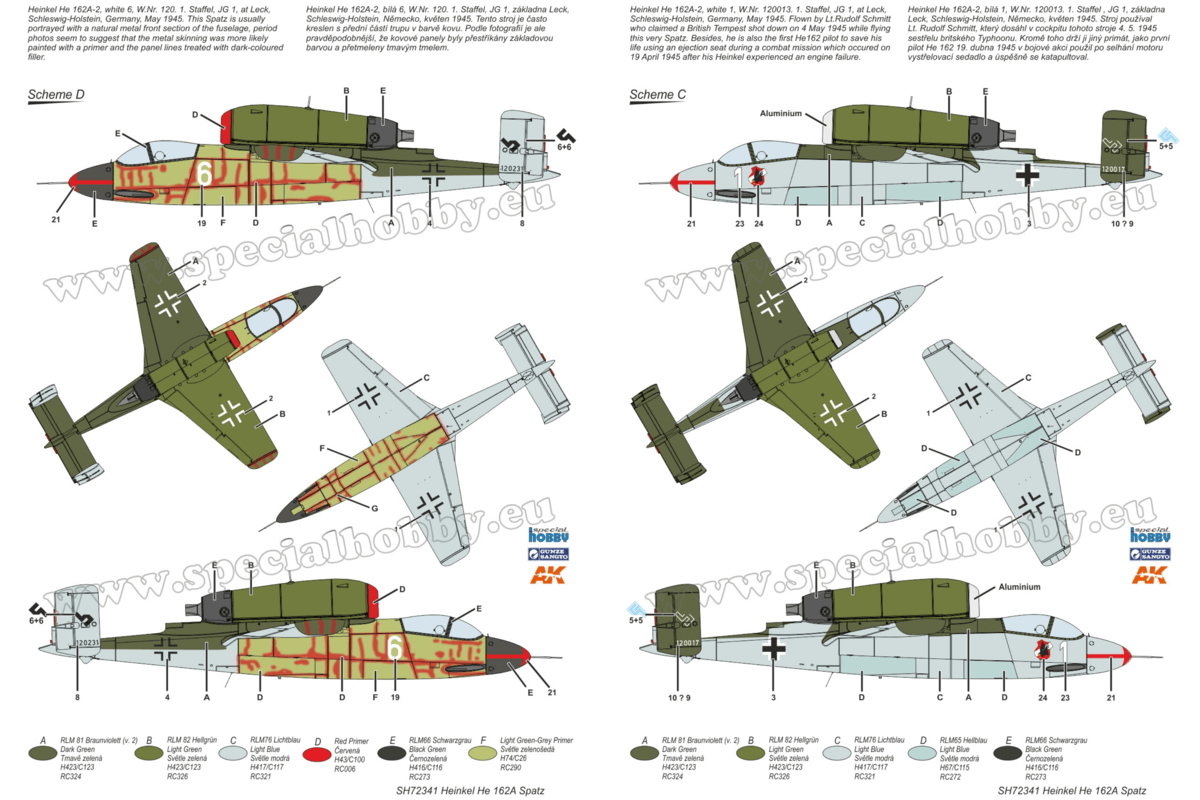 Another equally known machine is then "white 1", which not only occurred to one of the two proved victories He 162, but also the first successful ejection pilot in combat action. The last one is "white 6", a very often depicted machine, which probably flew with the machine part in the base color and "mastic".

If you want to know more about this type, we recommend Valiant Wing Publishing. The publication will not only bring you closer to history, but it is also valuable for modelers thanks to many photographs and detailed drawings. 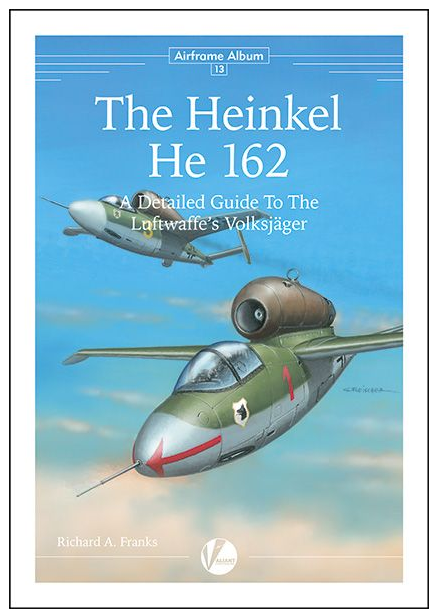 You can buy the model here: