Developments taking into account the motorization of cannons against the offensive car in 1938. 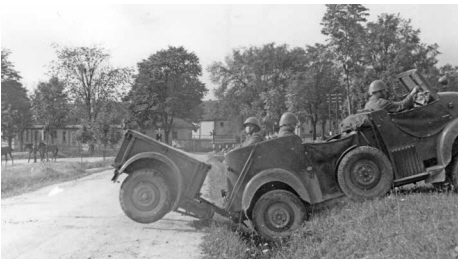 Mobility, dexterity and climbing of the vehicle with a loaded cannon: The vehicle easily overtakes terrain and slopes - tested only on a slope of 40 degrees, easily moving on a dry and humid oranica. Also, without great difficulty in this oranges, it is spinning back and forth. Track belts do not fall. Testing a 500-meter ride in the plane (the oranica on the slope was not available), the vehicle took the track in two and a half minutes, that is 12 km / h, dry oranica. Grain passage due to the season was not implemented. Walking on a 500-meter-long sandy road was conducted on the so-called Russian Route at Milovice Military Training Ground with a cannon loaded and towed. Hourly speed reached 26 km. Riding without a solid bottom was not performed.