Today's whirlwind of news will mainly concern models of combat equipment of all scales. Let's start with 1/72 models. Probably the biggest novelty on this scale (due to the size of the tank definitely :-)) is a new luxury model of the "royal tiger" - Kingstiger from FlyHawk...

Today's whirlwind of news will mainly concern models of combat equipment of all scales. Let's start with 1/72 models. Probably the biggest novelty on this scale (due to the size of the tank definitely :-)) is a new luxury model of the "royal tiger" - Kingstiger from FlyHawk. He arrived for the first time a few weeks ago, but we had to replenish the warehouse twice as much interest as he could have. In addition, we added other "seventies" of this manufacturer, including a small diorama with a section of a French street or a Renault FT-17 tank used in China.

IBG launched a successful model of the Japanese Type 95 HaGo tank. This tank accompanied the Japanese army from the fighting in China through the initial victorious campaign through the Pacific to the bitter end. The tank model of the British Chevrolet is interesting and in demand. For a change, it is suitable for many dioramas, whether with tanks or planes. 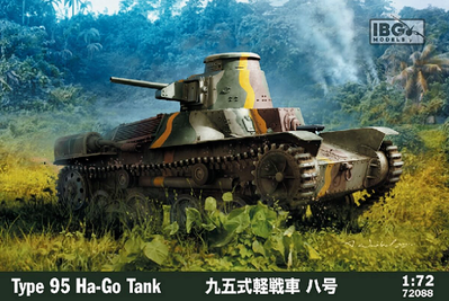 A nice novelty from Takom - the set includes a MAZ-537G tractor with a low loader and a T-54B tank. Very nice set for those interested in modern technology. 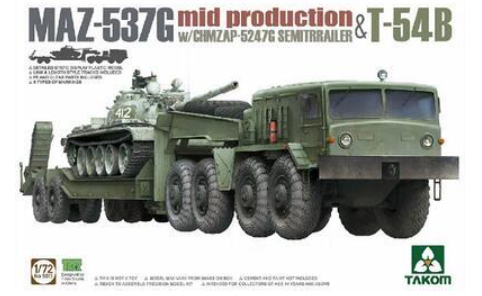 Finally, we will mention the news from the company Attack. The "professional" model Humber Mk.II is intended for those interested in British vehicles from the Second World War. In addition to plastic moldings, the model also contains cast and etched parts and even metal barrels. The upcoming Cabria Tatry 87 model then includes a crew. In addition, this manufacturer continues with its sets of masks for combat equipment.

Let's now come to a larger scale - 1/35. There is a lot of news here too. I'll start with probably the most interesting in shape. ICM has launched a new American "one and a half ton" model with a 4x4 G7107 drive. This is the first model in the series, because a large number of different superstructures were created on this chassis and the vehicles were used not only during the war, but also long after it. In addition, ICM has overtaken MiniArt, which also promises this model. This is the first time that manufacturers are going into a direct conflict with the same type at once, so we will see how it turns out. Other innovations in technology from ICM are also interesting in shape and unobtrusive, even if they are other versions of models that ICM has previously mentioned, such as the French FCM tank this time in German service or as a Marder tank destroyer and a set of three EINHEITZ- PKW.

Other models will be much more unconventional. From the AFV company, we have newly included models of British AEC Matador and Dorchester vehicles in our offer. Even more unusual is the model of a British tank destroyer on the chassis of the Centurion FV4005 tank. Therefore, it will not be lost in any collection due to its size.

New models from CSM are from another barrel. These are novelties in 1/35 scale from the period of the First World War Russo-Balt from 1914 or the Austro-Hungarian car Romfell.

But the news is not only from the period of both world wars, but also a much more modern time. Practically the most modern piece is the model of the American armored car m1240a1, the Russian anti-missile complex Tor-M2 represents the latest version of the Russian anti-aircraft kit on a crawler.

And finally, a few "classics" - Polish tank 7TP from IBG, Ferdinand from Amusing Hobby, unusual variants of Panther from RFM, or T-54.55 and Panzer IV from MiniArt. In short, see for yourself .... :-)

We stock many news on an ongoing basis, follow us on the web or on our facebook pages.

Thank you for your support and we will be happy to answer any questions by email shop@plasticplanet.cz, by phone at 235 315 925 or in person at the store in Prague 5 (opening hours Tuesday to Friday 12-18 h). If you need to stop at another time, call us and we will definitely make an appointment