After a long time, we are coming up with our newsletter again. As you have certainly noticed, interesting news across the modeling spectrum appears in our e-shop all the time. Now we would like to highlight the most interesting of them. We still operate online via the e-shop.

​After a long time, we are coming up with our newsletter again. As you have certainly noticed, interesting news across the modeling spectrum appears in our e-shop all the time. Now we would like to highlight the most interesting of them. We still operate online via the e-shop.

We will probably present the news today according to size. The submarine models in 1/72 scale are among the largest plastic models and there are not many of them available on the market. The German company Das Werk, still known for its models of combat technology, chose an unusual submarine from the period of the First World War as a model for its model. The submarine entered service in 1910. At the time, it was a quality and advanced design. When World War I broke out four years later, the U-9 was a success in the form of the sinking of three British armored cruisers in less than an hour. This event foreshadowed the importance of submarines during the two upcoming world conflicts. The submarine served until 1916, when it was decommissioned due to its wear and tear, during which it sank 18 enemy vessels. In 1/72 scale, the submarine model is 80 cm long. It is a real piece and will definitely not get lost in the collection. In addition, those interested in detail will be satisfied, because Das Werk pays attention to the design of the surface, all rivets and lines of construction, as well as the degree of detail. It's really such a really big model delicacy.

"Thirty-two" from ICM is famous for its quality and thoughtful construction. Even though they are biplanes, which by their nature are more complicated to build than monoplanes, it is a pleasure to build these models. The parts are just right and so, despite the uncomplicated construction, they are also processed in sufficient detail. I'll stop by "Fiat" first. ICM first issued two covers of the kit focused on the service of the machine at the Luftwaffe, now the "version" has finally "reached". Well, Tiger Moth, he doesn't even need to be introduced. In this first cover you will find two camouflage for the RAF - one silver from 1938 and the other from the armament of the Polish RAF training unit in a typical war camouflage. 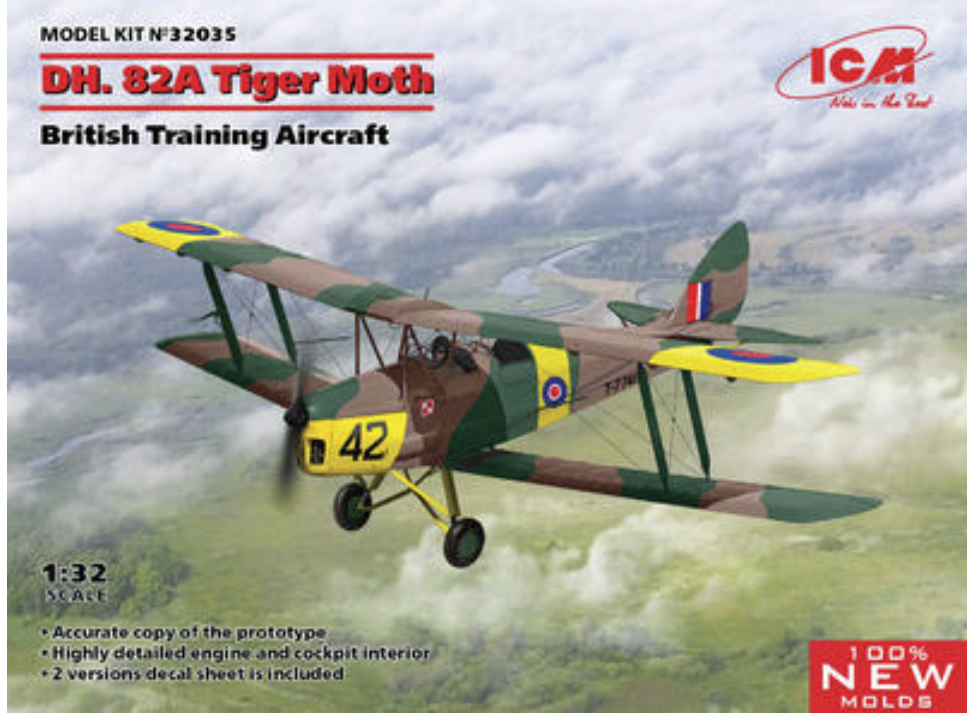 CSM has finally brought to the market a long-awaited novelty - the first-war Lancia 1ZM armored car. This machine is important for our modellers, because in 1918 and 1919 he took part in the battles in Slovakia, for which we brought several articles on the pages of our magazine. His fate is therefore directly connected with the establishment of the Czechoslovak Republic.

We will also mention models from the MiniArt company. I will point out a new series of German tank models from his production Panzer IV. As is customary with the manufacturer, it again brings a number of versions to the market, both with and without the interior. In addition, the manufacturer is expanding its range with additional versions of the German tractor, which has been used in both the civilian sector and the Wehrmacht.

For those interested in small scales, we will mention a new model Humber Mk.III from Attack as well as unconventional

Phanomen Granit „Propagandawagen“ with full interior. In addition, this manufacturer set out to produce non-traditional mask for combat vehicles.

Even those interested in aircraft will not come short. Valiant publishing brought the second extended edition of its publication on the legendary Spitfire with the Merlin engine. We will turn a little away from traditional aircraft model manufacturers such as Special Hobby and Eduard and mention the new Re 2001 1:48 scale models from Sword and the continuation of their series of post-war "Avengers" scale 1:72 - TBM-3U AVENGER.

Now let's leave the models themselves and go to the tools and aids. In the e-shop you will find interesting news from the new company ASK - razor saws of various shapes and coarseness of teeth plus useful lead wires of various diameters and even cross-sections. It is also worth mentioning the return of a practically complete range of Agama paints, both water-soluble, synthetic and alcohol paints and other accessories.

And that's not all, of course, you can find out more in our NEWS.

With wishes of health and well-being